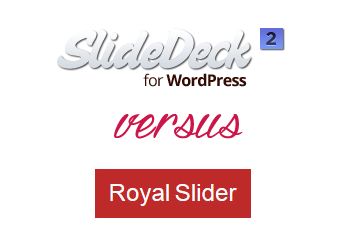 Which image slider plugin is the better alternative for my blog? With more and more competing premium WordPress plugins it gets harder and harder to answer that question. This article takes a look at two popular WordPress slider plugins: It compares SlideDeck with RoyalSlider in order to help you with your decision in choosing one.

There are several other alternatives to SlideDeck and RoyalSlider on the market which I have compared in separate articles. Go to my main WordPress Slider Plugins comparison to start your search.

Please note that this comparison only looks at the features on paper as reported by either plugin’s developers. It does not and can not tell you if or how well a certain feature will work for you. Because such a verdict would depend on too many variables, including your server setup and personal preference, I have decided to stick to the hard facts for this feature comparison between SlideDeck and RoyalSlider.

In my comparison I track 19 different features for all the slider plugins. In SlideDeck you can find 15 out of 19 of those features. RoyalSlider on the other hand offers 13 out of the 19 features in total.

Even if many of the features compared above overlap between the two competing products there is one very important difference: SlideDeck as well as RoyalSlider both provide a unique interface from which you will create powerful image slideshows that slide through multiple pictures. Since it is hard to rate the quality of such an interface objectively I recommend that you try both products yourself before deciding for one.

WPscoop indexes the exact prixing plans of all compared plugins. Please refer to the table below for a quick overview of the prices of SlideDeck and RoyalSlider.

To find the cheaper slider plugin for your individual needs please go to my main comparison article. There you can search for the features you need and then see the exact price you would need to pay for SlideDeck or RoyalSlider (as well as other alternatives).

Explanations: The minimum price compared above is the lowest price a product is available for, e.g. the version with the least features. The maximum price listed is for a version of the product that includes all features. For plugins that charge per addon it factors in the cost of all available addons. For some products the price increases if you want to use it on more than 1 WordPress site – the listed price for 10 sites shows if that is the case.

Disclaimer: While we update this comparison regularly we can not guarantee the prices displayed above are still correct and take no responsibility if they changed.

You can have a look at the Youtube videos below to see SlideDeck and RoyalSlider in action. That will give you a better idea of how the interface looks and which of the two WordPress slider plugins is easier to use.

Visit the developers website to learn more about each of the slider plugins and order or download the software.

Most WordPress plugins have an option to test their service for free, either thrhough a basic free version, a trial period or online demo. Check if such an offer exists for SlideDeck and RoyalSlider and if so: Make use of it! By doing so you can compare both plugins directly and find out which one is the better alternative in you situation.

But wait, there is more! Besides SlideDeck and RoyalSlider I have compared several other WordPress slider plugins on WPscoop. I recommend you start your search for SlideDeck alternatives or RoyalSlider alternatives in the main comparison article. There you can filter all different products and search for the features you need.

SlideDeck vs. other slider plugins

RoyalSlider vs. other image slider plugins

Did you spot a mistake in here? Is some feature in my comparison out of date? Please leave a comment below so I can update the article!

Which one is the better WP slider plugin: SlideDeck or RoyalSlider? Please share your opinion or experience in the comments!